School of Dragons
(Battle for the Edge)

School of Dragons
(Wrath of Stormheart)

Leopold is a Terrible Terror owned by Harald Forkbeard. He is, so far, only seen in the expansion packs of School of Dragons, specifically "Battle for the Edge", "Return to Dragon Island", and "Rise of Stormheart".

Battle for the Edge

Leopold is seen with Harald, when he arrives at Dragon's Edge. He tells the player to pet Leopold and is amazed by how quickly they bond. The dragon is seen along his master along the rest of the expansion. When Harald steals the Book of Dragons, he sends Leopold with a message to the riders that he wants their telescope instead.

While on Hobblegrunt Island, Fishlegs spots Leopold dropping a piece of paper and suggests catching him. However, before the player can do so, the dragon flies away. The player then brings the paper to Fishlegs.

Leopold is not seen in the rest of the expansion and it is unknown where he went after leaving Hobblegrunt Island.

Though Leopold does not interact with the player in "Rise of Stormheart", Harald professes that Leopold is the only other creature that he cares for other than himself. This realization helps Harald decide to help the player and the Dragon Riders by telling them where Nikora Stormheart keeps her stash of Grimora venom. In exchange, he wants the player to make Leopold some armor to protect him.

Leopold accompanies Harald in his further escapades while serving Nikora Stormheart. Harald commands The Tempest and attacks Berk. The game player fights Harald within the 'Dragon Tactics' activity and Leopold is part of his attacks, flaming at the player. Ultimately Harald, Leopold, and Nikora's forces are driven away, but the battle was only a distraction while Nikora took over Auction Island. Leopold is seen with his special dragon helmet on, made during the "Rise of Stormheart" Expansion.

Leopold appears similar to a normal Terrible Terror. He is purple in color with reddish-brown spines on his back and tail. He has two black horns on his head and his eyes are a bright orange in color. 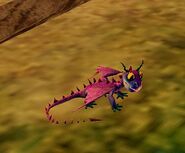 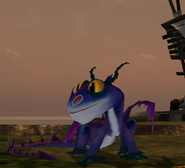 Leopold can be seen to the left of Harold in this picture. 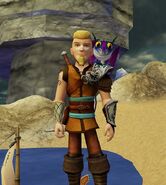 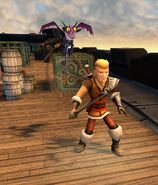 Retrieved from "https://howtotrainyourdragon.fandom.com/wiki/Leopold?oldid=570550"
Community content is available under CC-BY-SA unless otherwise noted.