How to Train Your Dragon Wiki
Register
Don't have an account?
Sign In
Advertisement
in: Dragons: Rise of Berk, Dragons, Dragon Hybrids and Subspecies,
and 8 more

These look quite similar to the regular Snaptrapper, but their wings resemble orangey, dark green leaves that fall during autumn. One can even see the faint patterns on its wings that resemble the network of veins of a dried leaf on their wings. This may be a tactic to help camouflage themselves in their seasonal habitat. Their neck, head and tail are also green. Their feet are green but orange near the claws. There are small orange bumps on the Leafy Snaptrapper's neck. 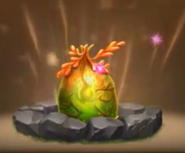 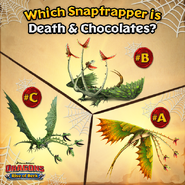