How to Train Your Dragon Wiki
Register
Don't have an account?
Sign In
Advertisement
in: Dragons: Rise of Berk, Dragons, Dragon Hybrids and Subspecies,
and 5 more

The Lavender Skrill is an exclusive Skrill which first appeared in the game, Dragons: Rise of Berk.

The Lavender Skrill is bright vibrant purple on the top of its body. The purple fazes into a blue, especially on its hind legs, then dissolves into a prominent green at its feet. The interior of its mouth is aqua and there is white patterning on its wings.

The Lavender Skrill has peculiar hunting behavior. It is able to produce an odor mimicking the plant lavender that serves as an attractant to prey. The prey is then incapacitated or killed by the Skrill's typical lightening strike. The Dragons: Rise of Berk description implies that this ability is most effective during Spring. There is also the implication that the Lavender Skrill prefers terrestrial animals as prey, since a lavender scent would not be useful for catching Fish.

Lavender Scent: The Lavender Skrill can produce a sweet lavender scent to lure prey in before attacking it, as suggested by its namesake. 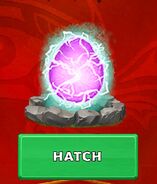