Lava-Lout Island is a location introduced in DreamWorks Dragons: Wild Skies and later appeared in Dragons: Rise of Berk.

True to its namesake, Lava-Lout Island is described to have lava-pools, lava-rocks and lava-pools, which suggest the presence of active volcanic sites on the island. The island, at the north of the Unlandable Cove, is made up of jagged edges and ridges of a mountain, accompanied by rocky surfaces and caverns. This makes the uneven surface prone to forming the thin trails of lava-falls streaming down the higher points and deep lava-pits in the ground. The ground there is seemingly bare, the only plants thrive would be dried tumbleweed. In addition, it is a deep shade of red or dark brown, hunting its rich but dry volcanic origins. There is a large mountain, presumably an active volcano, in the middle of the island.

Lava-Lout Island is a location to visit in Wild Skies. The players can search for the Smothering Smokebreath and Monstrous Nightmare there.

Lava-Lout Island is mentioned in the first challenge description from Hiccup in the now defunct online card game. 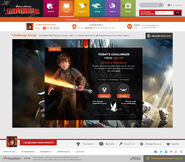