Knocks is an Armorwing introduced in the game, Dragons: Rise of Berk, during the "Berk Brawlers" Gauntlet Event in July 2017.

According to his official description, it was hard training Knocks out of his instinct to wield metal to his body, rather than simply protect a metal stockpile. It is unclear at what age the Hooligans trained him.

Knocks is an Armorwing with a dark green base color and golden-yellow markings on his wings and legs. His armor contains several intact weapons, possibly from the armory stash.

Knocks was first seen in this game in July 2017 as a prize for completing the Berk Brawler Gauntlet event. 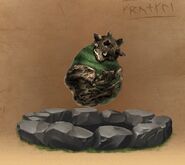 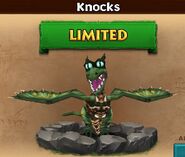 Retrieved from "https://howtotrainyourdragon.fandom.com/wiki/Knocks?oldid=567089"
Community content is available under CC-BY-SA unless otherwise noted.