Kit Harington is the voice actor behind Eret, Son of Eret in the How to Train Your Dragon trilogy.

Born Christopher Catesby Harington on December 26, 1986, in London, he is an English actor who rose to fame after landing the role of Jon Snow, one of the main characters in the HBO series Game of Thrones. After graduating from the University of London and Central School of Speech and Drama in 2008, Kit made his first debut in the drama War Horse on the London stage, which was soon followed by his breakout role as Jon Snow from the fantasy novels by George R.R. Martin. Aside from his recurrent television presence, Kit has also played the lead role of Milo in the 2014 film Pompeii and Eret in How to Train Your Dragon 2. In 2018, he married fellow Game of Thrones star, Rose Leslie, in Scotland. 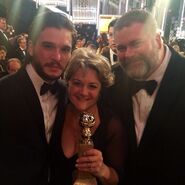 Kit with producer Bonnie Arnold and director Dean DeBlois at the 2014 Golden Globes. 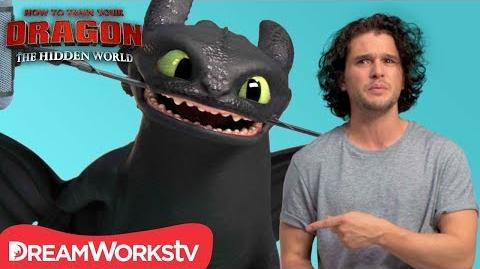