How to Train Your Dragon Wiki
Register
Don't have an account?
Sign In
Advertisement
in: People, Cast and Crew, Real Life,
and 12 more

Jay Baruchel (born April 9, 1982) is a Canadian actor who has starred in many movies including Tropic Thunder, I Am Reed Fish, She's Out of My League (with T.J. Miller), Million Dollar Baby, Fetching Cody, The Trotsky, The Sorcerer's Apprentice (with Alfred Molina) and Night at the Museum 2.

Baruchel was born in Ottawa, Ontario, the son of Robyne (née Ropell), a freelance writer, and Serge Baruchel, an antique dealer. He grew up and, to this day, lives in the Notre-Dame-de-Grâceneighbourhood of Montreal, Quebec, and has a younger sister, called Taylor. His paternal grandfather was a Sephardic Jew, while his three other grandparents were from a Christian background (of French, Irish, and German descent). Baruchel has said that he is "probably agnostic". 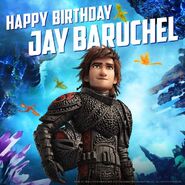 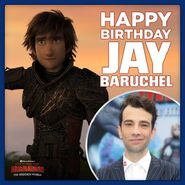