Jónsi, full name Jon Thor Birgisson, is the guitarist and vocalist for the Icelandic post-rock band Sigur Rós. He wrote and performed the end credit music for all three How to Train Your Dragon movies, along with the third film's "The Hidden World", and co-wrote the second film's "For the Dancing and the Dreaming"[1].

Jónsi began his music career in earnest at the age of 13 years old, when he learned to play his first song on the guitar. His public music career began in 1992, and in he joined Sigur Rós as singer and guitarist. The group took a hiatus in 2010, but became active again in 2012. In addition to work with Sigur Rós, Jonsi has performed solo, and also collaborated with his partner, Alex Sommers.

According to Spotify, Jónsi's top 5 most popular pieces are: 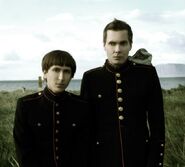