How to Train Your Dragon Wiki
Register
Don't have an account?
Sign In
Advertisement
in: Plants, Dragons: Rise of Berk, Dragons: Riders of Berk

"In Dragons We Trust"

Ivy is a climbing plant that appears minimally in the DreamWorks Dragons Franchise.

Ivy, also called Hedera, is an evergreen plant of the family Araliaceae. It is a climbing plant, meaning that it uses trees, rocks or man-made walls as support. If it doesn't have anything it can cling onto, it ground-creeps only a few centimetres long.

The ivy seen in the franchise is the Common Ivy (Hedera helix). It prefers non-reflective, darker and rough surfaces with near-neutral pH. It originates from Europe, western Asia and northern Africa.

In both the franchise and real life, ivy is used for ornamental purposes.

Some species in real life are invasive, being spread too much by the humans.

In the episode "In Dragons We Trust", Hiccup sits atop Mildew's House to repair the roof. Ivy is growing up and over the house.

Ivy is seen minimally in this game, surrounding dragon platforms, such as Wise Wind's.

In "In Dragons We Trust" 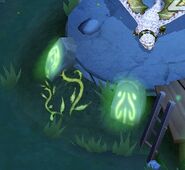