Itchy Armpit is a land of the Barbaric Archipelago that appeared in How to Train Your Dragon 2, and then later in a few games.

From what has been seen of Itchy Armpit, one can conclude it is a beautifully forested area, with rocky hills and mountains. There is also a thick mist in many areas, although this may simply be due to the time of year. The forestry appears to be dense and autumnal in coloration, stretching across the entirety of the island.

As revealed by Grimmel's map in How to Train Your Dragon: The Hidden World, Itchy Armpit is a relatively small gulf on the Mainland's coastline.

Though no dragons have been seen, Hiccup suspected there might be Timberjacks, Whispering Deaths and perhaps even a Night Fury living in the forests, though the latter was probably to cheer up Toothless. Although dragons seem to be absent, one can conclude there used to be many of them, seeing how Eret and his band made their base here.

According to the game, Dragons: Rise of Berk, many dragons used to live in the area. However, many were picked off by Dragon Hunters, with the Shivertooth, Sliquifier, and Thunderpede being some of the few remaining species. Hiccup's map also shows two unknown dragon species, Bighound and Sotole Taf living near Itchy Armpit as well.

The only known humans that lived in this region were Eret and his gang of dragon trappers. Seeing how they made their base here, one can conclude Itchy Armpit is a habitat for many dragon species, which is confirmed as they captured quite a lot of them. However, after the Bewilderbeast destroyed the fortress and freed their dragons, they were forced to leave to a new land in order to find more dragons for Drago's dragon army.

Hiccup and Toothless first encounter this new area after a crash-landing. Hiccup then proceeds to make a drawing of it on his map. Upon asking Toothless what they should name it, Toothless proceeds to scratch his armpit, giving Hiccup the idea to name the area "Itchy Armpit."

After Astrid catches up with them on Stormfly, they fly over the area to discover a large section of the forest had been burnt by fire, and so was a fortress, covered in gigantic ice crystals. This leads them to meeting Eret and his band of Dragon Trappers.

Itchy Armpit, referred to as 'Itchy Armpit Island' in this game, is a stage location the Dragon Riders flee to while being attacked by Drago Bludvist's armored dragon army. The player - playing as one of the rider/dragon pairs - must fire upon and break the armor from attacking dragons.

Itchy Armpit is incorrectly portrayed on the map in this game as part of Berk.

Dragons: Rise of Berk also released Itchy Armpit in July 2019 as an area the player could develop to place dragons. This location also has a Sawmill for dragons to harvest wood as a resource. 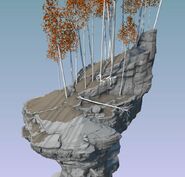 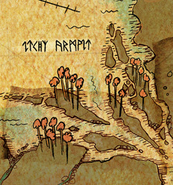 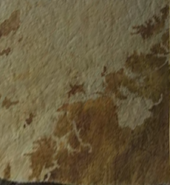 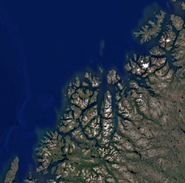 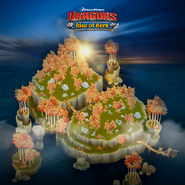 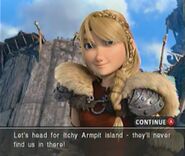 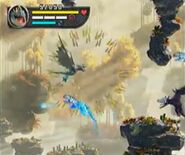 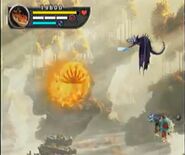 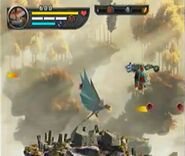 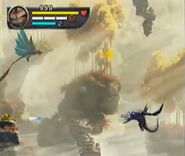