"Snotlout Gets the Axe"

Iron Isle is an island that first appears in Dragons: Race to the Edge. It is the only known home of the Armorwing.

Armourwing Island is made up predominantly of rock stacks, and is covered in forestry, ranging from light shrubbery fringing the edges to denser greenery in the center. It lacks a sanded/stony beach, unlike the majority of the Islands in the Archaepelago and is instead made of of rocky providences that down to the water. The tree life consists chiefly of one kind of tree: this appears likely to be a kind of sycamore, although this is not confirmed. Small shrubs, bushes and grassland appear to make the base of the land growing on the rocks.

In the episode, "Mi Amore Wing", the Dragon Riders revisit Iron Isle to drop off some scrap metal the resident Armorwing might like. While there, Hiccup notices the Armorwing has a Dragon Eye lens stuck to its armor. The Dragon Flyers have also followed the Riders to the island to see what they are doing there. A battle ensues between the Flyers, Riders, and the Armorwing. 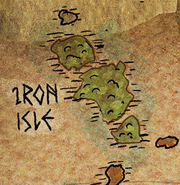 In "Mi Amore Wing"
Add a photo to this gallery

Retrieved from "https://howtotrainyourdragon.fandom.com/wiki/Iron_Isle?oldid=512304"
Community content is available under CC-BY-SA unless otherwise noted.