The Invincible is a sword belonging to Camicazi and is named in How to Speak Dragonese.

Camicazi is kidnapped from the Bog-Burglar Tribe, as well as Hiccup and Fishlegs from the Hairy Hooligan Tribe by the Romans residing at Fort Sinister. Kidnapping the heirs of the tribe was a plan to pit the tribes against each other.

While in captivity, Hiccup and Camicazi are allowed to keep their swords in order to practice for a gladiatorial event during Saturn's Day Saturday. When they arrive in the arena on The Valhalla Express (as the stadium has been intentionally flooded to set out the Sharkworms), Camicazi waves the Invincible at the crowd as she can understand that they are making fun of her even though she does not speak Latin.

No written description is given in How to Speak Dragonese of the Invincible. Camicazi is, however, depicted throughout the book with a sword in hand, presumably the same sword. It does not appear to be particularly ornate, and appears to nearly be as long as Camicazi's legs. 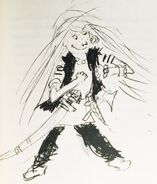 Retrieved from "https://howtotrainyourdragon.fandom.com/wiki/Invincible?oldid=672175"
Community content is available under CC-BY-SA unless otherwise noted.