An Injured Gronckle appears briefly in the game, School of Dragons as part of the player quest, "Back in the Saddle Again: Part 2".

Rescued by Fishlegs and Meatlug

During one of their visits to this Gronckle, Fishlegs and Meatlug find him in a cave, trapped under several boulders. While Meatlug keeps him calm, Fishlegs asks the player to shoot the rocks carefully. After that, Fishlegs thanks the player for help, saying that he will take care of the Gronckle.

The Injured Gronckle is a Titan Wing dragon. He is dark blue with turquoise and purple patterns. As a Titan Wing, he has red eyes. 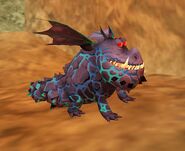 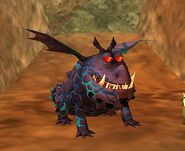 Retrieved from "https://howtotrainyourdragon.fandom.com/wiki/Injured_Gronckle?oldid=535947"
Community content is available under CC-BY-SA unless otherwise noted.