These Grimora-Infected Deadly Nadders, along with Infected Woolly Howls, appear in the Expansion "Rise of Stormheart" and subsequently the "Dragon Tactics" mini-game in the game School of Dragons.

These wild Deadly Nadders were released by Nikora Stormheart onto Dragon's Edge, followed closely by a release of Grimora which attached themselves to these wild dragons. This was meant to cause havoc on the Edge, for Hiccup's interference in her business. The player then 'battles' these dragons in the "Dragon Tactics" mini-game, which is implied to involve weakening them in order to douse them with saltwater and rid them of Grimora, not actually physically causing them harm.

Free from the parasites, these Deadly Nadders are seen flying away from the Edge back to Nikora's ship, though it is unknown why they would do so. Later, Nikora releases them from cages aboard her ship after infecting them with aerosolized Grimora toxin. Again, the player must 'defeat' these dragons in the "Dragon Tactics" mini-game.

These Deadly Nadders are all identical - the typical Nadder build in School of Dragons in a red color. Their spines and horns are a pink shade while their underbelly is more of a light orangey-pink.

The Infected Deadly Nadders appear several times in the Expansion "Rise of Stormheart". 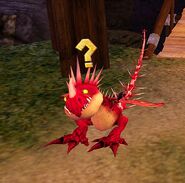 Retrieved from "https://howtotrainyourdragon.fandom.com/wiki/Infected_Deadly_Nadders?oldid=436160"
Community content is available under CC-BY-SA unless otherwise noted.