The Ice Needles is a location seen in the Riders of Berk comic, "The Ice Castle", and is located on the coastline of the Northlands.

The Ice Needles are huge spikes of ice, rendering the land behind them extremely difficult to access without a Dragon to fly over with. This location is situated near Balder Bay, and is one of the reasons the bay is the only place to dock a ship.

During the events of "The Ice Castle", The Hairy Hooligans must send their best climbers to scale the Ice Needles, in order to secretly access the Northlands and the Dragon egg auction held by Arngrim Dammen. Stormfly has been abducted by him as breeding stock.

Arngrim Dammen also mentions the Ice Needles when boasting about his escapades to the Hairy Hooligans. 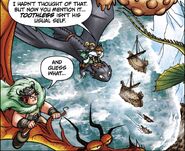 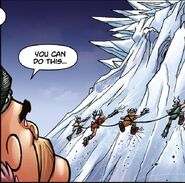 Retrieved from "https://howtotrainyourdragon.fandom.com/wiki/Ice_Needles?oldid=512297"
Community content is available under CC-BY-SA unless otherwise noted.