How to Train Your Dragon Wiki
Register
Don't have an account?
Sign In
Advertisement
in: Tribes, Book Tribes, How to Cheat a Dragon's Curse

The Hysteric Tribe is a tribe native to the island of Hysteria. The Hysteric tribe is known for their insanity and creativity also for being truly barbaric.

Interactions With Other Tribes

Hysterics are known around the Archipelago for being extremely aggressive, even more so than the standard Viking. They "were renowned for killing you first, and asking questions later". However, they are bound to their island for much of the year and therefore do not cause much trouble to other Tribes. Hysteria has very high cliffs and the Northern portion of the island is patrolled by a dangerous Doomfang, making passage by sea difficult. However, during Winter when the seas are frozen over, they may make excursions to neighboring islands such as Villainy for hunting game.

As with many Tribes in the Barbaric Archipelago, the Hysterics have their own unique battle call, named the 'Hysterical Howl'. It is a "spine-creeping" sound "like a pack of insane high-pitched wolves".

Unlike most Vikings of the Barbaric Archipelago, the "Hysterics have never believed that the world is flat, and that if you sail too far to the west you will fall off the end of it." Instead, they believed the Earth is round. In fact, a former chief - Bigjob - set sail across the Open Ocean to the 'imaginary' land of America.

The Hysterics also demonstrate inventiveness, creativity, and the ability to 'think outside the box', compared to other Viking tribes. They are attributed with making many inventions such as the Ticking Thing, the ships The American Dream and The American Dream 2, and the Scare-away-the-big-sea-creatures-and-keep-the-boat-from-sinking-machine.

The Hysterics, like many Viking Tribes, have a central gathering place for meetings and festivities - the Great Hall. This structure is large, having six fireplaces and at least one central long table that can seat most of the inhabitants. There are also many polar bear rugs. There is also a map of the Barbaric Archipelago that has been edited to include a land mass called "America". An area curtained off from the rest of the hall hides the frozen Bigjob and the mythical potato, surrounded by Squealers.

The Great Hall is where the Hysterics celebrate Freya'sday Eve with a Feast. All manner of food and drink is served, but onion soup is the traditional dish for this occasion.

According to Norbert the Nutjob, Hysterics have a type of trial system in place to decide the fate of suspected criminals. Sentencing often includes death. The trial is unsophisticated. The sentence is decided by tossing the Axe of Doom into the air and seeing how it lands, much like the toss of a coin. The criminal's fate is believed to be managed by a deity, rather than randomness.

It is assumed the Hysteric Tribe follows a Norse mythology belief system. Freya is specifically mentioned. Hysterics also believe in the concept of Fate, and that it is personified as a female deity.

The Hysteric Tribe is introduced in Book 4, and details some of their culture and beliefs. The tribe has the Vegetable-that-No-One-Dares-Name in their possession, and Hiccup infiltrates their village to acquire it, as this vegetable is the only known cure for Vorpentitis 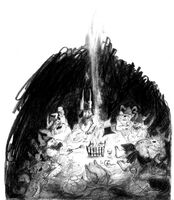 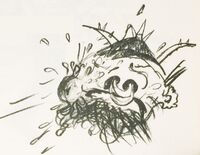 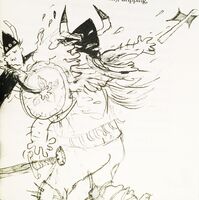