Blue and pink
Red and blue
Green and red

Rings of fire with central fusillade

Spiky long tail, head, and neck
Row of spines on the back
Yellow bulging eyes

The Hushbogle is a hybrid between a Snow Wraith and a Whispering Death that first appeared in the game, Dragons: Titan Uprising.

The Hushbogle is capable of breathing strong, concentrated blasts, followed by small rings of white fire.

The Hushbogle has infrared vision, giving it the ability to see in the dark. This ability is inherited from the Snow Wraith parent.

The Hushboggle has inherited tunneling abilities from both of its parents. It is known to drag its enemies into the tunnels that it has created.

The Hushbogle's behavior falls somewhere in between that of each parent. They tend to be solitary and not naturally associate with other dragon species in the wild.

Hushbogles are apex predators that like to hunt both above and below ground. Despite being predatory, they are prone to anxiousness.

Due to their infrared vision, Hushbogles tend to be more active at nighttime.

Despite the difficulty of training Whispering Deaths and Snow Wraiths, Hushbogles are a little more tractable. They do, however, require a seasoned trainer and are not suited to greenhorns. Training is accomplished more readily at night, due to their nocturnal behavior and infra-red vision.

The Hushbogle was first introduced in this game, along with many other dragon hybrids. The only way a player can obtain a Hushbogle is by breeding a Snow Wraith and a Whispering Death in the Breedery. 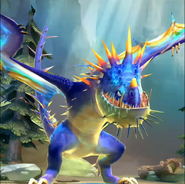 Retrieved from "https://howtotrainyourdragon.fandom.com/wiki/Hushbogle?oldid=569933"
Community content is available under CC-BY-SA unless otherwise noted.