How to Train Your Dragon Wiki
Register
Don't have an account?
Sign In
Advertisement
in: Characters, Humans, Human Characters from the Books,
and 11 more

Humongously Hotshot the Hero is a character first seen in How to Twist a Dragon's Tale.

He once was in love with Valhallarama (Hiccup's mother). Old Wrinkly had told Humungous to get the firestone from Lava Lout island to prove his worthiness. Humongous was trapped on the Island but managed to escape when the lava louts evacuated due to the masses of unhatched Exterminator eggs. His love gave him half of her ruby heart to return to her if he was in trouble but as his hunting dragon was killed he was unable. He met Alvin the Treacherous (Terrific Al), who he gave the ruby heart half to. Alvin was supposed to give the heart to Valhallarama but he kept it instead and told her that Humungous was dead. He then told Humungous that Valhallarama had found another person, Stoick the Vast. After that Humungous swore that he would never love again.

Alvin then asked him to kill Hiccup, and, not knowing Hiccup, Humungous said yes. He later became Hiccup's "Bardiguard" but kept trying to kill Hiccup, always having a change of heart at the last minute. Humongous accompanies Hiccup, Fishlegs, and Camicazi to the edge of Lava Lout island. When Toothless is sent down to Humongous with the returned half of the ruby heart, Humongous rushes to fight Alvin and help Hiccup in the quest. After the quest has succeeded Stoick gives Humongous a present of the Peregrine Falcon as a reward for saving Hiccup.

He appears as one of the fiancés of Princess Tantrum. Hiccup first meets up with Humongous again when he recognizes Hiccup. When the fiancés are released from their cages Humongous fights members of the Berserk tribe in true style.

At the end of the book, Humongous breaks into UG the Uglithug's castle and leaves UG five jars of honey from the bees of berserk. He also steals Princess Tantrum, Stormfly, and the ancient Hooligan throne from UG. Stormfly and the throne are returned to their rightful owners by Humongous. Humongous and Tantrum sail away together singing a love song.

Humongous is mentioned as being on the side of the Dragonmarkers.

Humongous is present on the Island of Tomorrow with the rest of the Dragonmarkers when Hiccup arrives to become king.

Riding on his unnamed White Dragon 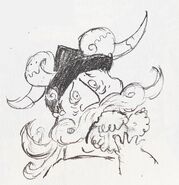