How to Train Your Dragon Wiki
Register
Don't have an account?
Sign In
Advertisement
in: Dragons, Dragon Hybrids and Subspecies, Large Dragons,
and 3 more

The Humbanger is a hybrid between a Snafflefang and a Whispering Death that first appeared in the game, Dragons: Titan Uprising.

Humbangers have two rear legs and a pair of small, but functional wings. They have a large round head with long teeth, especially on the lower jaw. The lower jaw is also arrayed with spikes. Humbangers have a pair of horns on the top of the head and a row of ridges on the center of the head. The tail is long but hefty, and is weighed down by a large mace-like ball at the end. The Humbangers' eyes have no visible pupils, similar to the Whispering Death.

Humbangers have a fire breath similar to its parent species. It tends to emerge explosively, rather than as a stream.

Humbangers are able to burrow into the ground, though they often prefer to stay near the surface.

In general, Humbangers are friendly and social dragons, often forming groups for mutual benefit. There are some individuals though, that are not as social as the norm, such as Boast-Roaster and the Groggy Fogtrotter. Humbangers also prefer burrowing near the surface rather than deep into the earth, though they appear capable of doing so. They have a diet of rock and prefer gemstones, similar to Snafflefangs, which have an affinity for geodes.

The Humbanger was first introduced in this game, along with many other dragon hybrids. The only way a player can obtain a Humbanger is by breeding a Whispering Death and a Snafflefang in the Breedery. 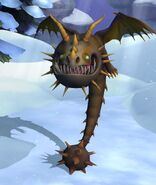 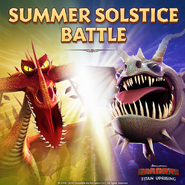 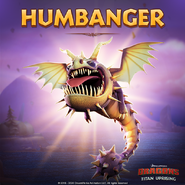