How to Train Your Dragon ON ICE

How to Train Your Dragon ON ICE is a live show appearing on certain Royal Caribbean cruise ships in collaboration with DreamWorks Animation.

Royal Caribbean's Allure of the Sea is the only ship containing an ice rink for both theatrical ice-skating shows and skate time for the passengers. Inspired by the DreamWorks movie, How to Train Your Dragon, a short ice-skating production was developed. Showtime ran about 25 minutes, and was performed into 2014. Royal Caribbean no longer performs this show.

All main characters appear in this feature. Gothi appears as the narrator, and actors skate while lip-syncing to the How to Train Your Dragon film's abbreviated voice sound track. Some characters are actors in Viking garb, while other characters appear as full puppet-type suits. Toothless and other dragons appear as puppets manipulated by ice-skaters, which the exception of Meatlug, who is played by an actor in a Gronckle suit.

January-May 2014, How to Train Your Dragon On Ice
Add a photo to this gallery 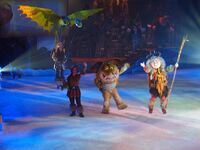 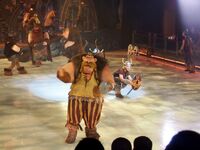 Retrieved from "https://howtotrainyourdragon.fandom.com/wiki/How_to_Train_Your_Dragon_ON_ICE?oldid=664311"
Community content is available under CC-BY-SA unless otherwise noted.