The Live Spectacular is a retelling of Hiccup's and Toothless' story and the events seen in the movie How to Train Your Dragon. It covered dragon training with Gobber, Hiccup shooting down Toothless, the pair bonding, discovery of the Red Death, battle, and Hiccup waking up with a lost limb and finding his village has finally accepted the dragons.

Differences With the Movie

Dragon Species Featured in the Show 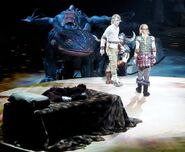 Retrieved from "https://howtotrainyourdragon.fandom.com/wiki/How_to_Train_Your_Dragon_Live_Spectacular?oldid=687687"
Community content is available under CC-BY-SA unless otherwise noted.