Hooligan Village is the village home of the Hairy Hooligan Tribe, first appearing in How to Train Your Dragon.

Hooligan Village is located just to the North of Hooligan Harbor. It is a small village comprising small thatched huts or cottages, surrounded by a double layer of protective wooden walls.

The Great Hall is a notable location, serving as a community gathering place. Book 5 mentions a 'Hospital Hut' building where injuries are treated, but in previous books, ill people visited Old Wrinkly for medical care, who resides on the outskirts of the village.

Various scenes of Book 1 take place in Hooligan Village, including but not limited to - Hiccup and Fishlegs in Hiccup's home dealing with a newly awakened Toothless, Stoick calling a Council of War with the Big Drums, and Furious flicking Gobber all the way back to Hooligan Village, where he falls through the roof of his own home.

Grimbeard's coffin is taken back to the village after its discovery at sea, and Alvin the poor-but-honest-farmer is introduced. As the Hooligans prepare for an excursion to the Isle of the Skullions, Alvin hangs around and Hiccup continues his lessons in the Pirate Training Program.

A portion of the story takes place in the Haddock home in Hooligan Village, after Hiccup loses Toothless. Later, Hiccup has a dismal lesson in 'Frightening Foreigners' class in the Great Hall.

Hooligan Village is mentioned and seen during Book 4 when Hiccup takes a sick Fishlegs to Old Wrinkly's cottage on the outskirts of town. Later he sneaks away from his home during the night to go on a Quest for the Frozen Potato.

Several buildings are mentioned in Book 5, including a 'Hospital Hut' and 'Dragon Stables'.

From How to Speak Dragonese 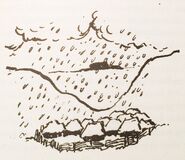 From How to Cheat a Dragon's Curse