Hookfang's Offspring is an individual introduced in the game, Dragons: Rise of Berk, but may refer to any dragon children Hookfang may have had, such as in the movie short, Gift of the Night Fury.

During the events of Gift of the Night Fury, Hookfang disappears along with the rest of the dragons of Berk. Hiccup is able to follow, courtesy of hitching a ride on a broody Meatlug. He discovers Hookfang, as well as the other dragons, on an island with mates and offspring.

The individual called 'Hookfang's Offspring' in Dragons: Rise of Berk is a somewhat uniform orangey color as a hatchling, but grows into an adult with a yellow base that fades into a dark green on its back and wing edges. Additionally, there are purple marking on the body and wings.

The hatchlings seen in Gift of the Night Fury are orange-red like Hookfang, purple, dull yellow, and another is blue with red edging.

Hookfang, along with an undefined mate, hatch eggs on the Rookery. When Hiccup uses Hookfang to fly back to Berk, his offspring try to follow, then all the dragon hatchlings follow. They have a hard time flying however, and Hiccup devises a way to get them off the island.

Hookfang's Offspring appears in this game as an exclusive dragon. 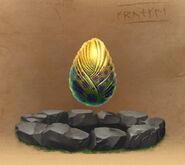 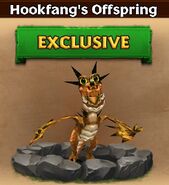 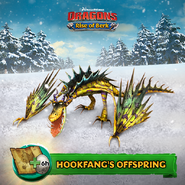 Retrieved from "https://howtotrainyourdragon.fandom.com/wiki/Hookfang%27s_Offspring?oldid=486400"
Community content is available under CC-BY-SA unless otherwise noted.