Honey Bees are insects that were first introduced in the game, DreamWorks Dragons: Wild Skies.

Honey bees are insects of the genus Apis. They are famously known for their yellow and black striped bodies, their products, and their stings. Honey bees (and their products) are extremely important both commercially and environmentally.

Bees for highly structured colonies, both physically and socially. There is one Queen bee, which bears all the offspring for the hive, drones (fertile males), and countless worker bees (sterile females). It is the work bees that humans most encounter. They serve a great many functions within the hive, from gathering pollen, tending the Queen, or tending larvae, to guarding and scouting. Queen bees only leave the hive to mate or to establish her own hive. Drones move from hive to hive and their only purpose is to mate with the Queen.

Bees communicate by chemicals amongst each other, as mentioned in the School of Dragons Quest, "Honey, I Stung Snotlout!".

Bees are extremely important to the environment for pollinating flowers, many of which rely extensively on bees and other insects for the continuation of their species. The best known use of a bee to humans, however, is honey production and uses thereof.

Honey is a thick, amber-colored substance produced by bees partially digesting flower nectar and regurgitating it. It is rich in sugars and enzymes and is stored in waxy structures, or "honey comb", also crafted by the bees. Honey is often harvested in late summer, but care must be taken to leave some behind for the bees to be able to survive winter. However, in earlier human ages before the advent of artificial bee hives with removable frames, the entire bee colony was often sacrificed to get the honey. Most likely this occurred during the Viking Age.

Honey is used in a variety of cooking. One of the more significant honey products to historic Vikings was mead, an alcoholic beverage made from fermenting honey. Often fruits and herbs were added as well. Mead was so revered to Vikings that it figured in Norse Mythology. Kvasir was a mythological figure renowned for his wisdom and intellect. He was killed by two dwarves who drained his blood and mixed it with honey. The result was the "Mead of Poetry". Often the Viking Great Hall was referred to as a "Mead Hall", as mead was more prized for ceremonies and by the elite than the more common ales and beers. Mead makes a very small appearance in School of Dragons in the form of a dragon-shaped barrel holding mead as a hideout decoration.

The waxy honey comb has many uses, as well, from simply something to chew on to candle-making to medicinal and cosmetic uses. In DreamWorks Dragons: Wild Skies, honey comb is an item that the player must collect to feed to dragons who favor it as a food. It is harvested by the player with a spear, which is used to poke and prod a hive hanging from a tree.

Honey also makes a small appearance in School of Dragons for medicinal uses. In a Farm Job, Hiccup makes a tea of honey and peppermint for a sick Astrid. Its medicinal use also appears in the player Quest "Honey, I Stung Snotlout!"

Honey can also be fed to dragons, in School of Dragons. This is mentioned in a Farm Job which asks the player for honey and ostrich eggs to "give Stormfly a new burst of speed and plenty of protein for a tough obstacle course."

In the mini-comic, "Queen of the Hill" (Inside "The Legend of Ragnarok"), Astrid is stranded on an Unnamed Island with Stormfly, who can't fly. They fend off many Smothering Smokebreaths through various ploys, one of which is the use of honey. Astrid whacks open a hive, spilling copious amounts of honey on the ground, trapping the Smokebreaths.

In "Big Man on Berk", honey is mentioned briefly by Tuff in reference to Fishlegs itching his legs due to an allergic reaction to the new wax that Gobber has started using on the Riders' dragon saddles.

In this game, the player must acquire the favorite foods to tame certain dragon species. The player needs to purchase a spear to harvest honey comb from hanging bee hives at the Great West Ocean and Unlandable Cove. Honey Comb is the favorite food of the Changewing.

Swarms of bees appear in various locations around Berk. These bees can attack the player - playing as Hiccup - and can cause health damage.

Several bee hives represent a seasonal decoration that was introduced in the 1.48 version of the game. A player can acquire the decoration by buying it for 200 Beltane Butteflies and waiting one hour for its construction.

Bees were introduced to School of Dragons in May 2017 as a harvestable "animal" for the player's farm. One tree for bees can hold 1 hive. One hive produces one honey comb in one hour after feeding, which can be used to complete "Jobs" for Trader Johann.

A hive of bees appears as part of the quest "Honey, I Stung Snotlout." In this quest, Snotlout is stung by several bees in an attempt to get their honey. Later on, in an attempt to obtain some honey to help cure Snotlout's stings, the player uses the smoke of a Smothering Smokebreath to calm the bees and enable the player to take some honeycomb.

Mead is mentioned again in "Big Man on Berk" when Fishlegs is acting as his alter ego "Thor Bonecrusher", stating that he deserves a big feast of wild boar and mead.

Johann mentions mead during one of his stories in "Living on the Edge", saying he hasn't seen disaster like how the Edge appears since a battle where the triumphant chief encased the skull of his enemy in silver and drank mead out of it.

The Fireworm bears many similarities to bees, though it is not explicitly stated that their concept was derived from bees. The Fireworm species has a single much, much larger Queen, and a multitude of small individuals. The Fireworms create Firecomb, which greatly mimics a bees' honey comb in appearance. The firecomb is filled with a thick yellow substance referred to as fire gel, whereas bees' combs are filled with honey. Fireworms are even have more than four legs, as bees do, though the dragons have eight versus a bees' six. 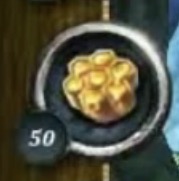 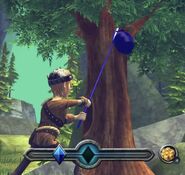 In "Queen of the Hill" 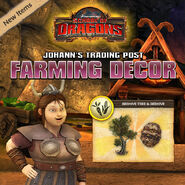 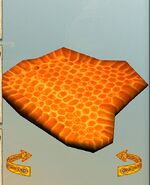 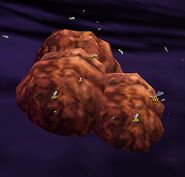 Beehive in the School of Dragons quest "Honey, I Stung Snotlout." 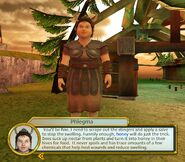 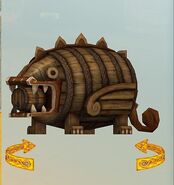 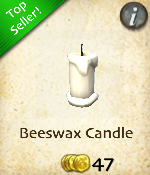 Retrieved from "https://howtotrainyourdragon.fandom.com/wiki/Honey_Bee_(Franchise)?oldid=559660"
Community content is available under CC-BY-SA unless otherwise noted.