How to Train Your Dragon Wiki
Register
Don't have an account?
Sign In
Advertisement
in: Dragons, Dragon Species from the Books, How to Betray a Dragon's Hero,
and 7 more

Hogflies (or hogflys) are first seen in How to Betray a Dragon's Hero where one becomes a companion for Hiccup.

Hogflies are described as having the appearance of a little piglet, and have a curling tail.

Hogflies are renowned for their scent ability and are used extensively by the Vikings for tracking. They may be difficult to train due to their lack of understanding.

Hogflies can also inflate their bellies like a beach ball, as seen in Book 12. Their tummies are so taut that darts can bounce off of it.

Hogflies are rather mentally dull, though they can speak Dragonese (it just may not make a lot of sense!). They are known to be the stupidest dragons in the archipelago.

What Hogflies lack in mental capacity, they make up for in attitude. They are very friendly and nice, and, in addition to adding a large amount of humor to the book by saying random things at random times, loves more than anything to be helpful (and play games).

Snotlout uses a Hogfly to track Hiccup at the beginning. He wakes up the dragon rebellion dragons, which results in Camicazi getting caught.

Toothless is shown not to like him much. Later, Hiccup successfully uses him to find Toothless and the other Lost Things.

The Hogfly is described in this references book.

The Hogfly helps Hiccup escape a pack of Sandsharks, because he thinks they are playing a game. The Hogfly is also reunited with his original owner, who thought he was dead. 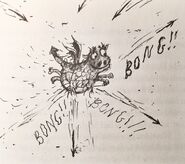 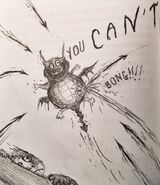