How to Train Your Dragon Wiki
Register
Don't have an account?
Sign In
Advertisement
in: Buildings, Dragons: Riders of Berk, Dragons: Rise of Berk,
and 2 more

"How to Start a Dragon Academy"

The Hofferson House is the domicile of Astrid's family on the Isle of Berk.

The Hofferson House appears to be structured similar to most of the homes in Berk village - a very steeply angled roof nearly down to the ground. A blue Deadly Nadder figurehead adorns the peak at the front of the house appearing to be settled on a column that runs vertically down to a small porch entryway with about three steps.

In the game, Dragons: Rise of Berk, the Hofferson House roof is plated with metal and has an opening at the top, presumably for a dragon to enter and exit. There is a large patio type extension on the back of the building for Stormfly to land and take off.

Very little is shown of the interior of the Hofferson House. There is a brief glimpse into Astrid's sleeping area. It is suggestive that she has her own bedroom area.

The sole purpose of the Hofferson House is to serve as a home and protection for the Hofferson family throughout a majority of the Franchise.

The Hofferson House is frequently seen in the background of many episodes, but is not often a focal point.

In "How to Start a Dragon Academy", a very small portion of the interior of the Hofferson House is seem - Astrid's bedroom.

The Hofferson House appears in this game. The player is not able to enter the interior of most buildings, including this one. Astrid stands outside of her house, available for the player to interact with during quest activities.

The Hofferson House is situated toward the edge of the island, as opposed to the middle of the village as seen elsewhere. This structure is mainly a place for Stormfly to roost between Journey or Resource gathering dictated by the player.

In "How to Start a Dragon Academy"

"In Dragons We Trust"

In "How to Pick Your Dragon"

In "Portrait of Hiccup as a Buff Man" 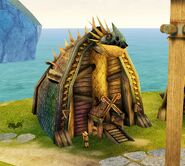 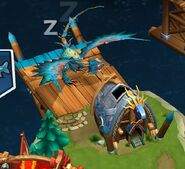 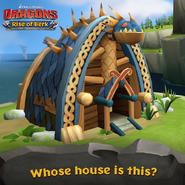