Hiccup's Toy is a small dragon plush that was given to him by his mother when he was very young.

The toy is a gray doll-stitched dragon with visible stitches at its seams and buttons for eyes. The dragon has four legs, two wings and a light spiked crest at the back of its head. It seems to resemble a Deadly Nadder with four legs but it's possible it isn't supposed to resemble any particular dragon species. Most probably due to wear and tear underwater as well as time, the toy is a little shabby and filthy. Hiccup's name is stitched into both sides of the toy.

In a flashback in How to Train Your Dragon 2, Hiccup's toy makes a short cameo in the second film. In Valka's flashback, Hiccup was in a cradle where he encountered Cloudjumper. The toy can be spotted very briefly at his feet in the crib when Stoick picked him up.

A larger version of it appeared in How to Train Your Dragon: The Hidden World in a flashback with six year old Hiccup and Stoick, when Hiccup was holding it in his arms while sitting on the stairs during the night.

As shown in "Breakneck Bog", Trader Johann informed Hiccup that he has a long-lost gift for him. After retrieving the gift, which was placed in a tiny chest, Hiccup opened it, only to see the smaller toy from his infancy, and recalls vague memory of it. Stoick then proceeds to tell him about how his mother had made it for him when he was just an infant and how at one point he had lost a week's sleep as he was terrified of it, resulting in Hiccup disposing of the toy while they were out fishing and how it landed in a fishing net shortly before the events of the episode.

Reunited with the toy, Hiccup explains how he was afraid to forget his mother after 'losing' her and treasures it greatly for it reminds him of her. He keeps the toy on his bed's headboard ever since.

Heading Back to Berk

The smaller toy appeared again in the background at the end of "King of Dragons, Part 2", as Hiccup was packing up his belongings in preparation to leave Dragon's Edge.

It is revealed that the larger toy survived the fires Grimmel had set on Old Berk, and that Hiccup carried it with himself to New Berk. Over nine years after settling on the new island, the toy can be seen again laying on a table in his workshop. It's uncertain if Hiccup was keeping it there purposely, or if one of his children had been playing with it and left it there.

Hiccup's toy at the foot of the crib, right side 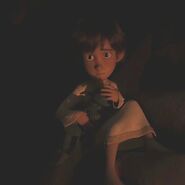 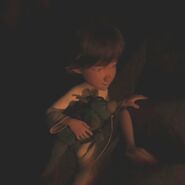 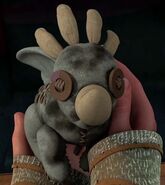 In Dragons: Race to the Edge

Retrieved from "https://howtotrainyourdragon.fandom.com/wiki/Hiccup%27s_Toy?oldid=468342"
Community content is available under CC-BY-SA unless otherwise noted.