Hiccup Horrendous Haddock III wears a flight helmet that covers his face while flying to protect it from high winds (as he flies a Night Fury, the fastest dragon), and as insulation while flying at high altitudes.

The top is black with three rows of small spines on the top. There is also the Berk crest symbol on his chest that is on both sides. The bottom half is made out of brown leather that covers his mouth and chin. The lower half can be flipped up like a visor. The bottom half also has slits, enabling Hiccup to breathe. Hiccup usually wears it while flying.

As shown in How to Train Your Dragon 2, after encountering a mysterious Dragon Rider, Hiccup is abducted while Toothless falls into the ocean. When a group of Seashockers drag the Night Fury under, Hiccup's helmet is left floating in the water. Stoick and Gobber later find it while searching for Hiccup. Worried his son might be in danger, Stoick has his dragon Skullcrusher find Hiccup by following his scent from the helmet. Stoick gives it back to Hiccup once he finds him. 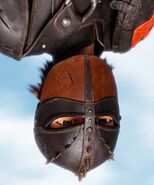 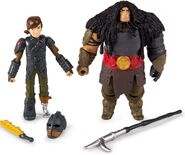 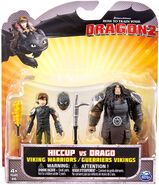 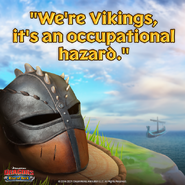