While saving Hookfang in "Dragon Down"

Shield the user from high temperatures

Hiccup's Fireproof Shield is a simple shield designed by Hiccup and put together by Astrid, Fishlegs, Snotlout, Tuffnut and Ruffnut in "Dragon Down".

Because of the heat-resistant properties of the fire-loving Monstrous Nightmare, the scales are effective against heat coming from a specific direction. However, the scales might melt under high temperatures.

In "Dragon Down", the gang tries to save Hookfang, who was hiding in a searing hot cave in a volcano. They collected the scales he was shedding and construct the shield under Hiccup's instructions. After it is complete, Snotlout and Hiccup enter the cave. Soon, the shield starts to melt, but held up just long enough for the duo and the dragon to escape. 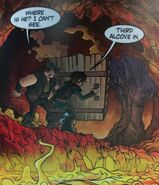 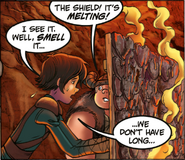 The shield in action