At an unknown point, this Whispering Death's egg was found by Arngrim Dammen of the Northlander Tribe. He took it to sell in his dragon egg trade.

Despite knowing the dangers of its species, Hiccup decided to try to train it. Fortunately, he was successful and the baby Whispering Death returned to Berk after Dammen had been defeated. He was last seen sleeping comfortably on Stormfly with the other baby dragons rescued from Dammen.

Hiccup's baby Whispering Death is teal, with a yellow belly and red spikes. 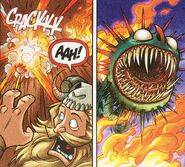 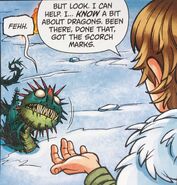 The Whispering Death with Stormfly and the other babies 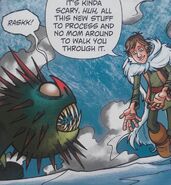 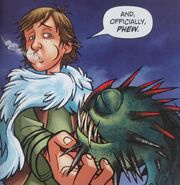 Retrieved from "https://howtotrainyourdragon.fandom.com/wiki/Hiccup%27s_Baby_Whispering_Death?oldid=386122"
Community content is available under CC-BY-SA unless otherwise noted.