A Helpful Typhoomerang appears in the mini-comic "The Eel Plague".

The Dragon Riders partake in training exercises along the coastline of Dragon's Edge. Hiccup had taken the Dragon Eye with him, but dropped it into shallow, but eel-infested waters. They decide to find a Typhoomerang to help them retrieve the Dragon Eye. On an unnamed island near Eel Island, Fishlegs stopped at some tall grass to relieve himself. As he does so, a Typhoomerang peeks out of the grass at him. Both human and dragon are alarmed, and both retreat. After Hiccup acts silly in front of the Typhoomerang, the dragon relaxes, realizing the Dragon Riders mean no harm. The Riders lead him back to Dragon's Edge with the promise of lots of eels to eat. This helpful Typhoomerang then gets the gist of what the humans want, and retrieves the Dragon Eye. After taking his fill of eels, the Typhoomerang leaves, presumably back to his island.

This helpful Typhoomerang is a reddish color, with perhaps a bit of orange mixed in. As is typical of these dragons, he has a white head and belly, as well as white wing edges. His head horns are dark brown, and his eyes are the color of flames. 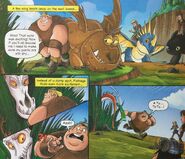 Retrieved from "https://howtotrainyourdragon.fandom.com/wiki/Helpful_Typhoomerang?oldid=535930"
Community content is available under CC-BY-SA unless otherwise noted.