A Helpful Shivertooth appears briefly in the game, School of Dragons in the expansion, "Rise of Stormheart".

At some point before the expansion, this young Shivertooth arrived on Scuttleclaw Island and built a nest there. It soon shed some of its fangs, which were left in its nest. Gobber collected two of the fangs, which he gave to the player when they came looking for Shivertooth fangs for Astrid's Dragon's Edge defense project. Knowing that the player required five fangs, Gobber gave him fish to feed to the Shivertooth in order to befriend it. After feeding the fish to the Shivertooth, it allows the player to take three more fangs from its nest. These fangs are used to complete the Ice Axe that the player uses in Dragon Tactics.

This Shivertooth has a typical appearance for its species. He is completely purple in color with icy-blue eyes. 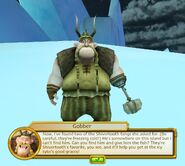 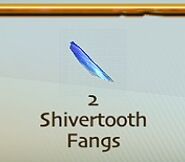 Empty nest
Add a photo to this gallery

Retrieved from "https://howtotrainyourdragon.fandom.com/wiki/Helpful_Shivertooth?oldid=380179"
Community content is available under CC-BY-SA unless otherwise noted.