A Helpful Prickleboggle first appears during the third expansion pack of School of Dragons, "Battle for the Edge".

Around the season of Dreadfall, Fishlegs visits Dark Deep. The 'Helpful' Prickleboggle, however, steals his Dragon Cards and hides them on the island. Fishlegs asks for the player's help, who finds the Prickleboggle and the cards buried nearby.

This Prickleboggle looks like any member of its species, being light green with brown spots on the back, a pale belly and black horns. 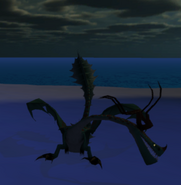 The Helpful Prickleboggle on Glacier Island

Retrieved from "https://howtotrainyourdragon.fandom.com/wiki/Helpful_Prickleboggle?oldid=570529"
Community content is available under CC-BY-SA unless otherwise noted.