Heel & Brak is a Hideous Zippleback that appears in the game Dragons: Rise of Berk.

Heel & Brak is black with red belly, horns, lobs and claws. It has dark blue patterns on its back and brown patterns on its wings. The black turns into pale dark pink towards the edge of its wings. It has black lines on its jaws, reminiscent of a liquid dripping from its mouths. Its eyes are white and appear to not have pupils. 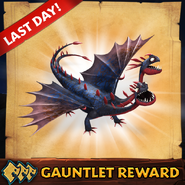 Retrieved from "https://howtotrainyourdragon.fandom.com/wiki/Heel_%26_Brak?oldid=530929"
Community content is available under CC-BY-SA unless otherwise noted.