How to Train Your Dragon Wiki
Register
Don't have an account?
Sign In
Advertisement
in: Objects, Franchise Objects, Heather,
and 2 more

Heather's horn is one of her main accessories. It was one of the many presents given to her father, Oswald the Agreeable, from allies all over the Archipelago — to congratulate him for the birth of his daughter Heather. This gift, in particular, turned out to be from the Chief of the Hairy Hooligans, Stoick the Vast, as it has his chief seal on it.

During the events of "Have Dragon Will Travel, Parts 1 and 2", it was revealed that the horn was a tribal present from Stoick the Vast to Oswald the Agreeable of the Berserker Tribe for his newborn daughter Heather.

Also revealed in "Have Dragon Will Travel, Parts 1 and 2", for unknown reasons, Heather was separated from her father and insane brother and was taken in by a couple who raised her as their own. Heather always kept this horn with her as a reminder of her birth family, as shown in "Heather Report, Parts 1 and 2".

Also in "Have Dragon Will Travel, Part 2", Heather reveals how the horn was from her father. While she and Astrid are out having some girl time, Toothless begins to snoop through Heather's bag, finding her horn. Hiccup recognizes the seal on it as his father's. He then travels to Berk to get information from Stoick, even questioning if Heather was his own sister. After learning the truth, Hiccup races to tell Heather that Stoick gave the horn to Oswald for his daughter. This means Oswald was Heather's father, making Dagur her brother. In spite of all this, Heather still kept the horn.

Heather used her horn in "Edge of Disaster, Part 2" to call Windshear back after she lent her dragon to Ruffnut to help the Dragon Riders.

The horn looks similar to that of a yak's horn — grey, sharp and long. The horn is a little worn out and filthy, possibly because of wear and tear faced over time. There are ropes twined neatly around it and the Hooligan's Chief seal carved onto it. In Dragons: Race to the Edge,  Heather is shown to wear it attached to her leather belt. 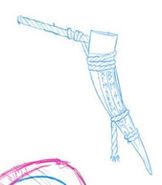 In "Have Dragon Will Travel, Part 2"

Heather using her horn to call Windshear in "Edge of Disaster, Part 2" 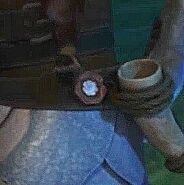 In "To Heather or Not to Heather"

In "Searching for Oswald... and Chicken"