"Have Dragon Will Travel, Part 2" (mentioned)

Heather's parents were a couple that adopted the lost daughter of Oswald the Agreeable.

Captured by the Outcasts

Heather's adoptive parents were captured and held hostage by Alvin the Treacherous while he blackmailed Heather into getting information on training dragons from Berk.

Heather claims to the Dragon Riders that she and her parents were attacked by pirates and laid siege to her village.

Heather finally confessed that her parents were captured by Alvin, not pirates. However, the Riders had already found out she was working with the Outcasts, so no one believed her.

When Astrid, who was disguised as Heather and infiltrated Outcast Island, was about to leave with the Dragon Manual, Alvin came back with Heather's adoptive parents, revealing the truth. He would return them to "Heather" for the book. Astrid then tries to rescue them, but is found out by Alvin, when he touched her dyed hair, and is forced to take them to Hiccup and the others. The couple was frightened at the sight of Toothless, and were carried by Stormfly back to Berk.

Heather's parents then left Berk with their daughter and headed back home to their island.

Heather mentions in "Have Dragon Will Travel, Part 1" that her village was destroyed in a raid by Dagur the Deranged. She also insinuates that her parents were killed in the raid.

Heather also revealed in "Have Dragon Will Travel, Part 2" that her parents were actual adoptive parents and had been separated from her real family at a very young age. 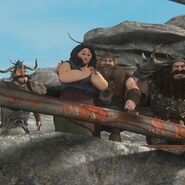 Retrieved from "https://howtotrainyourdragon.fandom.com/wiki/Heather%27s_Adoptive_Parents?oldid=568972"
Community content is available under CC-BY-SA unless otherwise noted.