"Portrait of Hiccup as a Buff Man" (in paintings)

Hamish II was the son and successor of Hamish I. He was one of the Vikings in a long line of Chieftains on Berk.

As most of the chiefs and their successors do, Hamish II had a painting done with his father, Hamish I, by the beach. As he was considered a runt, or a 'hiccup', the painter intended to portray him as a larger, buffer person. Clearly upset, Hamish still kept the original painting, that of his real appearance with his father. He buried his father's treasure and the original drawing, then created a tresure map for another future 'hiccup' to find. Hiccup and his friends later find it in "Portrait of Hiccup as a Buff Man".

At some point during his adulthood (according to the expansion "Secret of the Leviathan" in the game School of Dragons), Hamish II teamed up with Bork the Bold to hide the Dragon Bloom on Impossible Island. On this island, he designed distinctly Berkian puzzles, adding on to the already existing obstacles built by the Defenders of the Wing. According to Skulder the Archaeologist, Hamish II only left Berk once and wrecked his ship in the Ship Graveyard.

Promptly after Hamish I's passing and his inheritance, Hamish II decided to leave most of his treasure behind, for the next 'hiccup' to find. He created a treasure map with six clues, along with a three-piece key. The key consists of interlocking bronze pieces that fit perfectly into a shape with a hole in the middle.

In his painting with his father, he noticed that Hamish I's knee was pointing to a sea stack perched on the horizon. Thus, he included this clue in his treasure map, "Where the land meets the sea, in the crook of the master's knee, that's where your search will be...gin."

Gaining inspiration from the glacier next to the sea stack, he writes "From here you see the sea that's been sewn, look to where water turns to bone." Over there, he buries the treasure in ice. He then set up several booby traps in the glacier, and ensured that it was somewhat challenging--even dangerous, for the treasure hunters. The third clue spells "Call on Magni; you'll go astray. Freya, though, will show the way", which informs the reader that one cannot break the ice, but instead, melt it. Magni is the god of strength, while Freya is the goddess of fire.

Next, he hides the net piece of the key on a sea stack. The sea stack resembles a serpent, and the hiding place, its mouth. Thus, he sketches a serpent that looks similar to the sea stack in terms of structure, and writes "At the edge of the world, a midst the raging sea, in the serpent's mouth lies another key."

In the forest, Hamish builds a gigantic wall of rock with different symbols. "The world is right when stars align. When not in sync, the danger you'll find.", spells the clue. He built the wall such that the two rocks with the star symbol engraved on it had to be pulled out at the same time. When done so, the wall caves open. Hamish then built four pedestals in one of the caverns, and leaves four key pieces on it. He writes, "Something pure and something strong, look first to yourself and you won't go wrong." While there are some made of gold (pure) and iron (strong), Hamish leaves one which shines and reflects one's image back (look first to yourself).

If any pieces are chosen, it would trigger a chasm in the ground to split open, leading the hunters to another cavern. Over there, Hamish carves out an oddly shaped hole. One that if all the key pieces are joined together, would fit into. By turning the key, Hamish ensured that another pedestal rose from below the key. This would open up another secret passage, where he kept all the riches--the burial room of his father. On the last pedestal, Hamish left the very last message to the finder, "This treasure was passed from father to son. I leave it to you, the next worthy one, for only a hiccup could get this far. From one to another, be proud of who you are."

Despite the lack of technology in that era, Hamish crafted his burial chambers so well with contraptions so complicated, seemingly impossible. He seems to possess a rich understanding of mechanical construction, and uses plenty of sophisticated traps that probably use a complex system of gears and triggers. His devices all seem to be powered by gears, as they rotate, and are often set off by chain reactions initiated by the treasure hunter. He used this knowledge to increase the traps on Impossible Island, showing more of his mechanical prowess.

Hamish is evidently an accomplished poet, excellent at riddles, word play and foreshadowing. His riddles are all shrouded with mystery--solvable, but complicated. His play with rhymes and poetry form gives his clues an elegant, yet grand ring.

The inaccurate portrait of Hamish I and II. 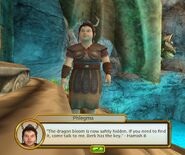 A note left by Hamish II in School of Dragons 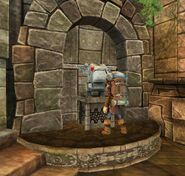 Eruptodon statue and trap in the style of Hamish II

Mulch comparing Hiccup and Hamish in School of Dragons