Hairy Hooligan Weapons are weapons used by the Hooligan Tribe.

As Vikings, the Hooligan Tribe is well versed in warfare and therefore weaponry. They use it, for the most part, for defensive purposes. Though the Hooligan tribe do have human enemies to protect Berk from, the weaponry was largely used to fight dragons. Weapons are mostly constructed by the Hooligan blacksmith, which is currently Gobber the Belch.

After ending the war with dragons in the first movie, the village shifted away from large-scale weapons production. Gobber, as the village blacksmith, had a large back stock of weapons and more available time since he mostly made weapons. In "Viking for Hire" Gobber becomes depressed not having a significant role in the village any longer. He attempts to peddle his weapons for other uses, with little success. Ultimately, Gobber is able to find more activity tending to the resident dragons' teeth.

In "In Dragons We Trust" the Berk Armory is burned to the ground and the weapons inside destroyed. Though unable to be proven, Hiccup feels Mildew started the fire to frame the dragons so that they would be banished from the island.

In the following episode, "Alvin and the Outcasts", the Hooligans are able to utilize common household tools as weapons, since the Armory was destroyed. This episode also shows that Hooligans give their babies and young children miniaturized but functional weapons.

The Mace-Axe-Sword is as the name sounds, a combination of a mace, an axe, and a sword. It is seen occasionally in the background of some episodes.

Most, if not all the Vikings from Berk possess an axe. Axes can be simple or double-sided. Both of them have sharp blades tied to a wooden handle. Most notable axes are Astrid's old and new axe, as well as Stoick's axe.

Simply made Iron Swords are found throughout the franchise, frequently seen being repaired in Gobber's Blacksmith Shop. Made from Iron and forged by Gobber, these swords are simple but sturdy. The handles are wrapped with leather for extra grip. They can be seen in the background of many Viking homes and during battles.

Gronckle Iron swords were later (accidentally) invented. For a time, the exact recipe for Gronckle Iron was unknown, so the swords were rare. Sometime later, during "Bad Moon Rising", the formula was finally found by Fishlegs when he was captured by the Dragon Hunters, who had already begun industrializing Gronckle Iron production. It is assumed that after this, many weapons were "upgraded" and made with Gronckle iron instead of typical iron. These swords could cut straight through a typical sword, making them incredibly powerful in battle, especially against an opponent who does not have a Gronckle Iron sword.

Maces, both normal and Gronckle Iron, are seen throughout the entire franchise. They are small metal balls covered in spikes, with a handle made out of wood or metal, covered in leather for a better grip. One notable mace wielded by the Twins is Macey.

Catapults are a big wooden mechanism with a spoon-like structure used to launch boulders. They are often seen on ships rather than on land, due to them being weapons for long range attacks. Sometimes, for comedic purposes, people are launched from catapults intentionally or by accident.

There are several large catapult towers surrounding the village of Berk to protect from an attack by sea. These structures are later repurposed as windmills and structures for the resident dragons later on in the Franchise.

Throughout the franchise, Bola weapons are used in a variety of situations, mostly by Hiccup. They are constructed from ropes and specially made iron weights, with each of the three arms held together by a metal ring. As seen in Hiccup's bola launchers, they are able to be folded up neatly, making them easier to transport. This does not impede them from functioning once thrown but seems to actually make them more accurate.

Bludgeons are mainly used by the Jorgenson family, as each member has at least one. They are small wooden carvings, reminiscent of bowling targets. They have small rocks implanted in them, in order to make the force of impact bigger.

Daggers are small knife-like weapons used for hand to hand combat. They are made from either iron or Gronckle iron and have a small handle made out of the same metal. The handles can be covered or not in leather. A notable dagger seen in the franchise is Hiccup's dagger.

While pikes are seen less in the franchise, they are still seen in Gobber's blacksmith shop and in the hands of the Twins. In a scene of How to Train Your Dragon, the Twins enter with pikes, albeit two very different designs. Tuffnut's is fitted with a special head that allows the spearhead to be replaced. Spearheads, being fairly small, tend to need to be replaced after just a few sharpenings, since all sides of the spearhead are sharpened. Two rivets can be seen holding the spearhead in place. Ruffnut's pike, however, is a sharp, conical head that is fitted directly to the shaft. This seems to be made specifically for stabbing since this form of the pike is missing sharp sides like Tuffnut's pike has.

The Hooligans also use hammers for battle. War hammers are different from hammers used in carpentry and other trades, in that they are far larger and often have spikes adorning them to cause more violent damage.

In "How to Start a Dragon Academy"

In "In Dragons We Trust"

In "How to Pick Your Dragon" 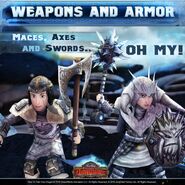 In Gobber's Guide to Battling Dragons

Retrieved from "https://howtotrainyourdragon.fandom.com/wiki/Hairy_Hooligan_Weapons?oldid=432655"
Community content is available under CC-BY-SA unless otherwise noted.