Hagan Frostbeard was formerly the Viking chief of Chilblain, and appears in the Comic, "Snowmageddon".

The Eruption of Mount Ymir

Chilblain is a snowy land whose village is situated very close to Mount Ymir, a volcano that had been dormant. It becomes active in the Comic, "Snowmageddon". With the volcanic activity, hoards of dragons not typically seen in icy regions come to Chilblain to take advantage of the volcanic heat. Chief Hagan reacts to what he perceives as the immediate threat - Dragons - rather than addressing the possible consequences of the active volcano. He attacks any dragons nearing the village, as Vikings have always done for generations to protect themselves.

Hagan's very capable daughter, Smulder Frostbeard, challenges him in front of the people of Chilblain. Destruction of the village is eminent from the effects of the volcano. The people must be quickly evacuated, and the Dragon Riders offer the assistance of dragons to do this quickly. Hagan, refuses the help, not wanting to use their "mortal enemies", while Smulder wants to embrace progress. The villagers side with Smulder, and Hagan backs down, allowing his daughter to take over the Chiefdom.

Hagan appears to be a rather gruff and belligerent older man. He is stuck with the "old ways" of doing things. Hagan would also prefer to stay and fight, even though it may be futile. However, he does love his daughter, as evidenced by running off Gobber from Chilblain in earlier days for a perceived "threat" to her, and allowing her to gain control of the Chiefdom without a fight. 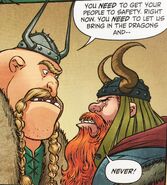