Gruffnut Thorston is a member of the Hooligan Tribe. He is the cousin of Tuffnut and Ruffnut Thorston in the TV series Race to the Edge. He is first mentioned in the game, School of Dragons.

Gruffnut does not appear in the game, School of Dragons, but is mentioned by Ruffnut as a relation belonging to House Thorston, in the player Quest, "Meet the Hairy Hooligan Clans".

Tuffnut idolizes his cousin, Gruffnut, and gets excited when they are informed that he is coming to visit. Ruffnut is less thrilled and views him as an interloper. Upon his arrival, Gruffnut tells tall tales and cannot back them up. Tuffnut is enamored with his supposed adventures. While at Dragon's Edge, Gruffnut snoops around and tries to cajole the dragons to allow him to ride them. Being unsuccessful, he knocks out Tuffnut, ties him up, and leaves him in a cave somewhere on the island. He switches out their clothing and helmets, and imitates Tuffnut, in order to get on Barf and Belch, who needs Ruffnut also to pilot.

Though he pretends to be Tuffnut fairly well, ultimately he says and does things that are very uncharacteristic of his cousin, such as volunteering for patrol and allowing Ruffnut to hold Macey. Ruffnut appears suspicious, but goes out on patrol on Barf and Belch regardless.

Ruffnut and "Tuffnut" spot a lone ship, which "Tuffnut" wants to investigate. Ruffnut calls Gruffnut out, and correctly guesses that he owes the people on the ship a lot of money from gambling and wanted to sell Barf and Belch to them to make up for it. As Ruffnut and Gruffnut fight for control of Barf and Belch, Tuffnut comes zooming in on Toothless and with Hiccup. Gruffnut and Tuffnut fight on top of the Zippleback as he is flying through the air. Ultimately Ruffnut tosses Tuffnut Macey and he knocks Gruffnut off Barf and Belch onto the ship below. The men he owes money to - who appear to be Dragon Hunters - are about to grab him, but Ruffnut and Tuffnut whisk him away. As punishment, they leave him on Dark Deep and has the resident Catastrophic Quaken to contend with.

Each Thorston must complete the Thorston Induction Trials on his or her nineteenth birthday to be considered a full-fledged member of House Thorston. Gruffnut appears to administer the challenges to the Twins. He indicates that only one of them can complete the trials. Both decide not to participate unless both can become full Thorstons. Separately, Gruffnut convinces the Twins to take the trial anyway, offering solutions of how to get the other twin into the clan. He officiates over three challenges. Initially the Twins become highly competitive with each other, but at the final challenge, decide again that neither will finish without the other. As the Twins emerge from the last challenge carrying a small box, Gruffnut announces that they both won because a "secret" fourth challenge was selecting family over anything else. He promptly takes the small chest as "verification" and leaves. Agnut Thorston later arrives at Dragon's Edge to administer the Thorston Induction Trials. She informs the Twins that Gruffnut was not sanctioned by the clan, nor has completed the trials himself.

Later, Gruffnut is seen on a boat with the small box and opens a secret compartment. He is expecting treasure, but a Dragon's Eye lens pops out - something that appears worthless to him.

Johann finds out Gruffnut has a Dragon Eye lens and captures him. He ties Gruffnut to the fore of one of the Dragon Hunter Ships bound for Dramillion Island. While the Dragon Riders attempt to stop Johann, Krogan, and their respective soldiers from capturing the Titan Wing Dramillion, the Twins notice him tied to the ship, looking like a figurehead. The Twins save him, but he convinces them that there is something important he must retrieve on the ship. This turns out to be treasure, and because it is booby-trapped, the Twins, Gruffnut, and Snotlout become trapped as the ship sinks. The other Riders must stop pursuing their enemies in order to save them. As punishment, the Twins disown him and dump him on an island with nothing else but some treasure.

Though just cousins, Gruffnut looks identical to Tuffnut, with the exception of pulling all his hair behind his head and different clothes and helmet. He also has the same, but more gravelly, voice. Gruffnut also lacks the stooped poster of Tuffnut, and stands straighter than Tuffnut does. But either way, they almost look like twins.

Strength and Fighting Skills: Gruffnut had stated to have beaten Tuffnut many times as kids. Appearing to be around the same age, Gruffnut was still very difficult for Tuffnut to defeat, until Tuffnut grabbed a weapon - Macey - and knocked him down.

Acting: When Gruffnut was dressed as Tuffnut, he was able to trick most of the Riders, as he tried acting like Tuffnut. However, he gained suspicion from Ruffnut and was finally caught as Ruffnut knew that Tuffnut would not have acted the way Gruffnut did. While he has an almost identical voice, he is exposed when Tuffnut mentions events only he would know, while Gruffnut agrees with Ruffnut's decision, something Tuffnut would never do.

Intelligence: Gruffnut was able to trick most of the riders by making them think that he was Tuffnut and smarter than Tuffnutt to make him believe in his lies very easily.

Dragon Thieving: He tried and was at first successful to steal the dragons from their owners. He offered fish to Stormfly but was caught by Tuffnut, he tried to steal Barf and Belch but instead they crashed, and he was close to being able steal Hookfang and Meatlug, but thanks to Tuffnut's chicken, his plans failed.

Endurance and Stamina: He was able to take the attacks from Tuffnut from their fight, with the addition of taking a hit from a mace and still being able to get back from falling from Barf and Belch and onto a Dragon Hunter on a ship. 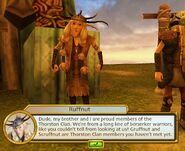 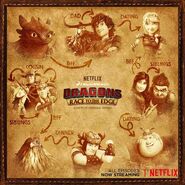 Retrieved from "https://howtotrainyourdragon.fandom.com/wiki/Gruffnut_Thorston?oldid=438595"
Community content is available under CC-BY-SA unless otherwise noted.