Gronckle Island appears in the game, School of Dragons, as part of the Flight Club activity for players.

Gronckle Island is a small rocky island with multiple water pools and no vegetation. It has all geometric rock formations. It is shown cloaked in the dark of night with a full moon above.

This is the fourth Toothless-exclusive Flight Club lesson the player can use. Instead of racing through hoops as other levels, the player must simply fly around the island on Toothless and find Hiccup and a flag hidden on the island (Hiccup is only named but not actually animated on the island). 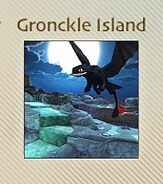 Retrieved from "https://howtotrainyourdragon.fandom.com/wiki/Gronckle_Island?oldid=512281"
Community content is available under CC-BY-SA unless otherwise noted.