All the best in dragon weaponry. Fangs like daggers, extra spike on neck, ball with spikes on end of tail ... 8

Gronckles are slow to manoeuvre in the air ... 0

The Gronckle is a dragon first featured in How to Train Your Dragon (Book 1), and is mentioned throughout the Book Series.

The Gronckle is described as the "plug ugly" of the dragon world. They are rather rotund, and can easily get too overweight to fly. They are also prone to dragon acne, perhaps accounting for their pimply hides. Gronckles also have huge sharp teeth.

Gronckles can also grow rather large for a Hunting dragon. The Thin Prefect's Gronckle is stated to be two metres high (roughly 6.5 feet) and is able to pick up two boys in its mouth simultaneously. He also sports a horned ruff around his neck, something not seen in images of Gronckles.

accirding to the incomplete book of dragons, Gronckles can have more than one head.

Gronckles have extremely tough, armored skin with many sharp spikes. They also have a mace-like tail and dagger-sharp teeth. Though known not to be the brightest of dragon species, Gronckles are able to speak Dragonese.

Gronckles rate a "5" Disobedience score, and are therefore trainable. They are prized for their natural weaponry and skill in battle. Typically Gronckles are trained for battle or as hunting dragons. Some have shown through the books to be rather loyal to their humans, and fought along side them in the Dragon Rebellion.

Gronckles were one of the original species to be mentioned at the beginning of the book, as the Hairy Hooligan novices entered the Dragon Nursery to grab a dragon to train. Individual Gronckles are then mentioned throughout the book.

Gronckles are mentioned in this reference book. 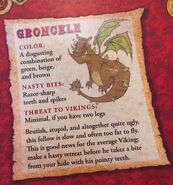