Covered in snow and ice
Cold-blooded
Icicles below chin
Spikey ridges along the back, jaws, and limbs

The Groncicle is a medium-sized Boulder Class dragon that first appeared in Dragons: Rise of Berk.

Groncicle eggs are oval-shaped with large ice spikes protruding from the surface of it. It is unclear if the 'ice' is real ice or other substances for defense or ornamental purposes. Their eggs are one of the few eggs with well-defined geometrical shapes and are spiky. Those in School of Dragons have flatter spikes.

According to the School of Dragons stable quest "Blast Chiller", Groncicle eggs need to be kept cold, not hot, to hatch.

Groncicles are covered in snow and ice. Their spines or hunches on their back resemble snowy mountains. They have spikes under their chin which resemble icicles or snow cones. The Groncicle looks like a muscular Gronckle except that it has a longer body length, is covered in snow and ice, and lacks a tail bludgeon, instead having a long, streamline tail. The original Groncicle from Dragons: Rise of Berk has a longer tail and a short neck with a low-set head; the Groncicle from School of Dragons has more of a Gronckle form with no neck and a shorter tail, as well as a crystalline skin covering.

The Groncicle seems to have no actual teeth in Dragons: Rise of Berk. But teeth that resemble a Gronckle's were added in School of Dragons. 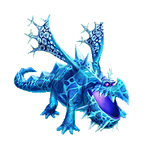 Groncicles that have reached the Titan Wing stage change quite a lot. Their body is darker, and there are light blue outlines of what seems to be their liquid nitrogen veins. Their wings have white rings and its edges develop small, spiky icicle-like structures. Titan Wing Groncicles' mouths glow purple and their eyes turn pinkish purple. Also, the icy spikes on their tails and under their chins become larger and thicker.

The Groncicle shoots powerful streams of explosive Liquid Nitrogen. Liquid nitrogen can reach temperatures close to -321 °F or -196 °C. This can potentially freeze their victim to death, meaning it also has the coldest blast of all the dragons. The Groncicle can use its blast to fill the gaps of broken constructions, as demonstrated in School of Dragons when a juvenile Groncicle repaired a broken bridge.

According to the Dragon Eye, the Groncicle's ice breath is amazing as very few dragons have it. The blast also has the ability to condense the water vapor in the clouds, causing it to rain or snow.

The Groncicle doesn't like warm climates, this is why it stays up north in the colder islands. While a Groncicle can survive in a warm climate, if it resides there for too long it can suffer lack of nutrition and comfort making it very vulnerable to the heat.

Groncicles eat snow to generate their ice breath. They will also use soft snow and this cold breath to build their nests. They are seen to live in social settings with one another. Groncicles are a peaceful, friendly, non-aggressive species. Having been the first dragons to ever be peaceful with humans (with the ancient Vikings of Icestorm Island), they are naturally kind with people. Despite their cold natures, Groncicles are big softies. They are a helpful race that allies to those who treat them with respect. But they do not respond kindly to a lack of respect and should not be taken lightly. Their affinity to ice and snow means they must remain in cold environments or they will overheat. Summer in Berk, for example, is too warm for them.

Interestingly, it is revealed in School of Dragons that Groncicles like smoothies made of a mixture of arctic gentian, arctic poppy, and pumpkins. It's indicated that no other dragon, or human, enjoys this strange drink. In addition, some Groncicle individuals, such as Sweetcicle, are known to eat the sweet variety of Glowing Algae that blooms during the spring. However, this algae has such a high sugar content that it makes the Groncicles that consume it extremely hyperactive.

This dragon first appeared in Dragons: Rise of Berk, along with its Titan Wing form, where the Frozen Groncicle was introduced.

In 2015, the Groncicle was made available in School of Dragons by completing the Icestorm Island expansion pack. All 4 stages were available for this dragon.