Gristle, as one of Berk's teenagers, helps put out fires in the village brought about by attacking dragons. She also takes part in training to kill and subdue dragons along with the other village teenagers. During training, she is the second student Gobber sends into the ring to try and fight a Nadder. She somersaults and rolls in front of the Nadder to confront and confuse it, but the dragon blasts smoke at her. After training she is much more adept at confronting dragons.

After the Red Death is defeated, Gristle integrates into a now dragon-friendly Berkian society.

Gristle is a lean, muscular woman wearing a blue sleeveless top. Her hat is lined with black fur that hangs down on either side of her head, almost like braids. There are small silver horns on both sides of the helmet. She wears leather gloves that lace half-way up her arm, light yellow pants and dark leather boots. Gristle also wears knee-pads and a leather belt which has a buckle with a dragon on it.

Second from right on the ground 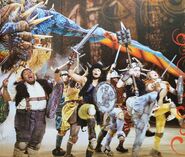 Center with Sword and Shield 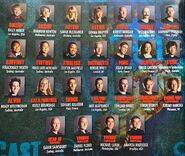