Long before the events of How to Train Your Dragon

Traveling across the skies

Grimmel's Airship is a contraption built by Grimmel the Grisly to travel across the skies with the aid of his Deathgrippers, which first appeared in How to Train Your Dragon: The Hidden World.

When Grimmel sedated Toothless and his mate, he attached the two Furies onto his airship as all of Berk's dragons charged out of the forest of New Berk to rescue their Alpha. Grimmel responded by aiming his harpoon at the Light Fury and forced Toothless to call off the attack. He then drove the airship to the Warlords' armada with all of the dragons in tow.

As the dragons were caged by the Warlords, Grimmel proceeded to lower Toothless to his employers, only to reel him back so that he could kill the Furies himself. However, Hiccup and the rest of the Dragon Riders flew in and knocked Grimmel away. Grimmel prepared to kill Toothless with his harpoon, but he was forced to dodge the Night Fury's plasma blasts, inadvertently releasing two of the chained Deathgrippers and left the other two flailing about with the greater weight of the airship. Hiccup jumped onto the airship to rescue Toothless and witnessed Grimmel use Deathgripper venom on the Light Fury before he released her from her shackles and rode her back to New Berk. Hiccup began to release Toothless from his bonds as the airship crashed into the sea. Hiccup and Toothless managed to escape in time and began to chase after Grimmel.

Grimmel's airship possesses four metal cranes that can be used by four of his Deathgrippers to lift the contraption up. In the center is a gondola for Grimmel to view his surroundings. The airship also has a harpoon that Grimmel can use to shoot his intended targets.

Transport: Using four of his Deathgrippers, Grimmel the Grisly travels through the air from one place to another with his airship. 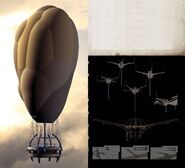 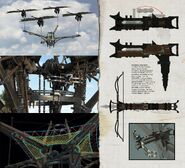 Retrieved from "https://howtotrainyourdragon.fandom.com/wiki/Grimmel%27s_Airship?oldid=531233"
Community content is available under CC-BY-SA unless otherwise noted.