How to Train Your Dragon Wiki
Register
Don't have an account?
Sign In
Advertisement
in: Characters, Humans, Human Characters from the Books,
and 20 more

How to Be a Pirate (mentioned)

How to Betray a Dragon's Hero (mentioned)

Grimbeard the Ghastly is a character that existed before the events of the books.

Grimbeard was married to Chinhilda and had three sons; Thugheart, Chucklehead, and Hiccup Horrendous Haddock II . Grimbeard broke Chinhilda's heart when he abandoned newborn Hiccup on a mountainside for being a runt, so she became the ghost that haunts the Bay of the Broken Heart. Hiccup the Second grew up with dragons after being rescued from starvation by them and years later Hiccup the Second returned and started the first Dragon Rebellion lead by him and his brother Furious. It was meant to be a peaceful talk but it quickly turned into a massacre when Thugheart lied to Grimbeard about Hiccup's intentions. Hiccup the Second was killed by Grimbeard, ran through with the Stormblade, but when he begged to Furious not to hurt anyone, Grimbeard realized what he'd done and tried to stem the blood but it was too late, Hiccup was dead and Grimbeard driven to bitter sorrow. In guilt, he burned down what remained of his kingdom and sailed off, never to be seen again.

But before he left, he set up a scavenger hunt for ten items which were his favorite treasures, they were later called the King's Lost Things. Whoever found the lost things and brought them to the Island of Tomorrow would become the next King of the Barbaric Archipelago. He hid the lost things behind terrible dragons, trusted people, and great puzzles. He set up the scavenger hunt, because he hoped that the next King would be a better King than he ever was.

Grimbeard is thought about a lot by Stoick the Vast. He often wonders what Grimbeard the Chief would do in a particular situation, as he is highly respected and thought of as being an ideal Viking chief. Specifically, Stoick wonders what Grimbeard would do after having received a threat from the Bog-Burglars, that Hiccup refutes as a plot of the Romans.

Ultimately Stoick chooses his son's explanation over what Grimbeard might have done.

Grimbeard was also mentioned again as winning the original swimming race in 3 months 5 days and 6 hours. For his prize, Grimbeard became King of the Wilderwest and asked for Murderous the Magnificent to be sacrificed to the Sky Dragons.

Wodensfang reveals Grimbeard's original name was Speedfast, and also looked very similar to Snotlout when he was young. He would not accept the Dragonmark, a sign of the Kings of the Wilderwest and Dragon-Riders, and made it the Slavemark. He then banned Dragonese after being confronted by Wodensfang. He was also the one who enslaved both dragons and humans to build the kingdom on the island of Tomorrow. 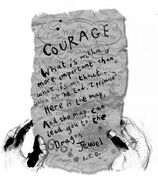 Last will and testament after Vorpent poison was applied

Grimbeard's coffin (he wasn't actually burried in it) 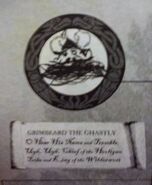 Grimbeard on the Hooligan family tree