Dull green with red to purplish-red belly and nasal horn

The Green Death is a gigantic Stoker Class dragon and a close relative of the Red Death[1] that first appeared in Dragons: Rise of Berk.

In Dragons: Rise of Berk, the Green Death appears nearly identical to the Red Death. Its scales are a dull shade of green, a reference to how it got its name. It also has a dull dark pink underbelly and nasal horn, instead of tan like its more aggressive cousin. The Green Death also sports a spiked frill, instead of a coral-like one seen in the Red Death.

In School of Dragons, the Green Death is nearly identical to its other depiction, only that it displayed a less bulky chest and forelegs, and significantly longer neck than in Dragons: Rise of Berk. It was also somewhat smaller, and had less prominent spikes on both its body and a smaller clubbed tail. The Green Death also possesses a coral-like frill instead of the spiked frill it sported in Dragons: Rise of Berk.

In Rise of Berk, the Green Death produces long streams of fire, similar to those of a Red Death.

In School of Dragons, the Green Death spits out small concentrated balls of fire that destroy anything in their path.

The Green Death's skin is very thick and resistant to lava, as the dragon won't suffer any ill effects after continuous and prolonged periods in direct contact with the boiling magma.

Due to its enormous size, the Green Death possesses a tremendous level of strength. It uses its massive jaws, claws, and tail as its primary weapons.

In Dragons: Rise of Berk, the Green Death appeared from a newly-formed volcano in Darkened Green, following a volcanic storm and odd behavior from dragons in the nearby Isle of Berk. However, unlike the Red Death, the Green Death meant no harm, and following a series of encounters with Hiccup, Valka, and the Dragon Riders proceeded to help them unlock its underlying dragons by scavenging for valuable collection items deep in the volcano's lava chambers.

In School of Dragons, the far less aggressive and manipulative Green Death proceeded to overtake its malignant cousin's former abode in Dragon Island, living alone and in peace, proceeding to hunt for food itself without the aid of other dragons. It got mildly annoyed when its home got intruded by Hiccup, Valka, and the Dragon Riders who hoped to be able to solve the rising buildup of toxic fumes.

The Green Death was stated to be a less aggressive cousin of the Red Death. Unlocking this dragon unlocks a new area called Darkened Green, lowers dragon training time at the Academy, and unlocks a series of new dragons called 'Brutes', namely a Boneknapper, Buffalord, Skrill, Snaptrapper, Stormcutter, and a Timberjack, as well as the achievement 'Go Green'.

The Dragons: Rise of Berk Green Death finds unique items to complete special collections for Brute Dragons and resources such as Fish and Runes. Collection items include: a tuna fish, a broken sword, a Viking ship figurehead, and others. 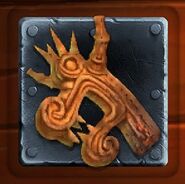 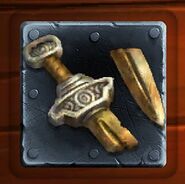 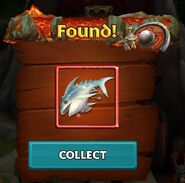 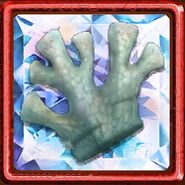 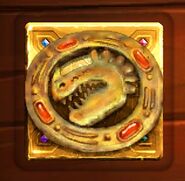 The Green Death appears in School of Dragons, where it made its home in the old lair of the Red Death. However, a build-up of magma and rock began to cause a release of toxic gas, or sulfur dioxide, around Dragon Island, as well as near the school. After clearing the problem, the Green Death got agitated with intruders in the island, but Toothless, who is now the Alpha, manages to calm it down. At that moment, Harald Forkbeard launches a harpoon into the Green Death, causing it to rampage so he could make his escape. Once the weapon is dislodged, the Green Death returns to the corona of the volcano.

A wild Titan Wing Green Death named the Crimson Death appears in this game in the Dragon Island area of the Burning Barrens. The dragon plays the role of a 'big boss' that the player must defeat in battle in order to advance in the game. Another individual named the Violet Death appears as the 'big boss' in the Blistering Badlands area.