Great West Ocean is a location first introduced in the game DreamWorks Dragons: Wild Skies, and later appeared in the games Dragons: Rise of Berk and Dragons: Titan Uprising.

This ocean is described to be 'not quite an ocean', instead, a cluster of rock formations and tall sea stacks, many of which form natural waterfalls, salt-water bays and lakes. The lagoon there is crystal clear, and leads to the main ocean. There is also a rich stock of geodes there.

In the Dragons: Titan Uprising iteration of this location, one land mass harbors a Dragon Hunter camp, with ship piers and several wooden buildings.

The player can fly to the Great West Ocean via the chasm at the west of Berk, and search for the Scauldron here. They can also harvest fish and honey comb.

The Great West Ocean is the fourth sub-section of the Mysterious Marshlands the player encounters. Several wild dragons reside here that the player must fight in order to advance in the game. Dragons seen here include but not limited to: the Deadly Nadder, Thunderdrum, Monstrous Nightmare, and the hybrid Hushbogle. 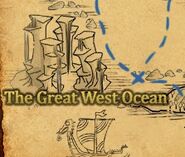