Grazefall is a Sliquifier that appears during autumn and was introduced in Dragons: Rise of Berk.

Grazefall takes advantage of the Autumn season, when deciduous tree leaves start turning color and dropping. This dragon then feels comfortable enough to dance around and in water. This indicates that Grazefall frequents coastal or even fresh water sources during Autumn, as those would be closest to trees (as opposed to the open ocean).

Grazefall is noted to be shy and elusive, only showing itself during the autumn months when it can blend in using its lead coloured scales. Most likely it is wild and untrained, and avoids humans.

Grazefall is mostly an amber color with orange spots on its wings and tail, and has a white belly. It has a yellow stripe lining its spine. Its eyes are bright blue. Its wings start off as red, but fade into black and are dotted liberally with orange speckles. Its tail is also black with orange spots.

Grazefall demonstrates a self-awareness of appearance. It's colors are somewhat atypical of other Sliquifiers, and realizes that it can be camouflaged in the right conditions. Its preference for dancing implies agility and gracefulness. Then again, the term dance in this sense could be used to describe its style of movement, rather than actual dancing: even so, should this be the case, it would still indicate an elegant dragon. As a Sliquifier, Grazefall has the typical acid breath ability. 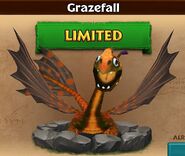 Retrieved from "https://howtotrainyourdragon.fandom.com/wiki/Grazefall?oldid=530904"
Community content is available under CC-BY-SA unless otherwise noted.