Gothi's Hut is a hut belonging to Gothi, located on the highest point on the Isle of Berk.

Gothi's Hut appears to be crafted from an old Viking ship, half of which had been sat upright to form the indoor living space and the other half forming a kind of porch. The figurehead of the ship has been turn to face a different direction. An addition has been built on the backside (keel side) for additional living space. The entire structure has added wood beam supports underneath. On the porch-like area, she does various activities such as practice her medicine or hang her clothes to dry. In the episode, "Animal House", she is also shown to have a pile of dirt on her makeshift porch area, with which she can write out messages to communicate.

The interior of Gothi's hut is rarely seen. Presumably, she has all the tools, trinkets, and medicines stored inside that she requires to carry out her duties as village elder and healer. She does have a hard, wood bed inside without a mattress or other type of padding.

Gothi lives in her hut, which contains a bed and presumably food stuffs. Her dragons also live there with her.

Gothi practices her healing arts on the deck of her hut and crafts medicines here. She will also see patients at the hut (those that can climb to it). It is assumed she also does some of her divining there.

Gothi's Hut appears in the episode "Dragon Eye of the Beholder, Part 2". Gothi accompanies the Dragon Riders to Glacier Island, leaving Gobber in charge of her healing duties at her hut. He unsuccessfully treats several Hooligans for their ailments.

The hut is seen again in "Big Man on Berk", when Gothi diagnoses Fishlegs with an allergy. He ends up hypnotized into thinking he is a fearless warrior named "Thor Bonecrusher".

Gothi's Hut appears in the second episode of the season, "No Bark, All Bite". After Chief Stoick finds out about Trader Johann's treachery, he destroys all supplies obtained from him, including the medicinal Willow bark at Gothi's hut.

Gothi's hut appears a couple times in the second movie. In the beginning racing scenes, the racing Dragon Riders fly too close to Gothi's hut and disturb her and her bevy of Terrible Terrors.

Later, we see a small bit of the interior of the hut at night. Gothi is sleeping on a hard bed under a pile of pet Terrible Terrors, who suddenly awaken and fall under the control of Drago's Bewilderbeast as he arrives at the village.

In this game, Gothi appears (speaking) to the player (playing as Astrid or Hiccup) on Dragon Tooth Mountain and asks for help getting firewood to cook meals, implying she lives on the mountain away from the village.

How to Train Your Dragon 2 (game)

Gothi's Hut appears as part of the landscape on Berk, but does not take an active role in the game.

Gothi's Hut appears, even if Gothi herself does not. Several player Quests as the player to fly through the clouds to her hut to survey the weather or practice flying with a dragon.

Gothi's Hut appears in this game but does not feature directly in game play.

In "Dragon Eye of the Beholder, Part 2" 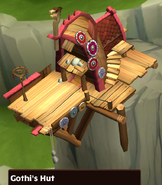 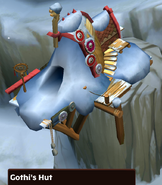 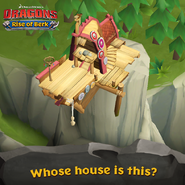 Retrieved from "https://howtotrainyourdragon.fandom.com/wiki/Gothi%27s_Hut?oldid=456185"
Community content is available under CC-BY-SA unless otherwise noted.